Florida Recount: The State of Play 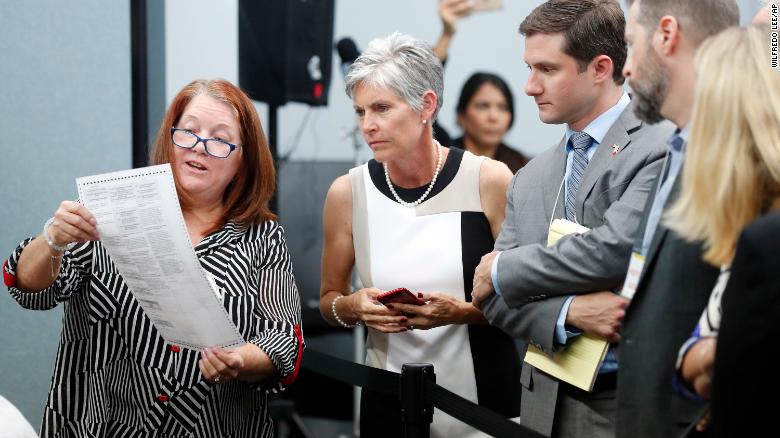 The Florida secretary of state announced that the razor-thin races for governor, senator and agriculture commissioner will be reviewed in a series of recounts, which were triggered because the margins in all three contests are under 0.5%.

A recount is underway in Florida for the Senate, governor and agriculture commissioner races following the 2018 midterm elections. On Saturday, the Florida secretary of state announced the recount, which was triggered because the margins in all three contests are under .5%. Each county is recounting votes and the results from the machine recount are due back by Thursday.

As the deadline approaches, Republicans are seeking to cast doubt on the election process, and Democrats are leveling increasingly heated charges in return.

Recount votes could start rolling in

Are you ready to recount? Tuesday should bring our first significant data haul that will give an idea of if this machine recount will be demonstrably different than the original count. Many smaller counties are expected to wrap up their process as soon as Tuesday and both sides expect them to certify and post their results. The key will be to compare the vote totals issued Saturday to the vote totals now coming in on a county-by-county basis. It won't tell us the whole story, but it should provide a glimpse of what to expect.

Will it get done on time?

We feel marginally better Tuesday than we did Monday that we will get a full recount of at least the Senate race between Democratic Sen. Bill Nelson and Republican Gov. Rick Scott, which is the race with the most at stake. The main source of worry was Palm Beach County where Susan Bucher, the Supervisor of Elections, predicted gloom and doom on Sunday, but on Monday after they got moving felt a lot better about their prospects. In fact, privately Democrats are holding onto the option of filing a lawsuit to extend the deadline, but at this point they are not moving forward because it looks like Palm Beach County will be done on time. Broward County remains confident they will get done on time, but they were slow to get up and running. While they are talking a good game, there are some nerves outside of the office that they will likely be pushing it right up to the deadline (you know, just like Election Night). Remember this is an enormous undertaking and even the best run counties, like Miami-Dade, expect to be done, but it requires them to count 24 hours a day, and they started soon after the order was issued Saturday afternoon.

Both Republicans and Democrats are beginning to believe that Wednesday's hearing in Federal Court could prove to be an enormous harbinger of the ultimate outcome in this race. Judge Mark Walker will be hearing a Democratic argument to revisit tens of thousands of ballots that were not counted because they did not strictly adhere to Florida law. Marc Elias, the lead Democratic lawyer, has repeatedly said that the way these ballots were handled disenfranchised a whole host of voters, particularly in minority communities. Not everyone agrees with that assessment. Mark Earley, who is the Supervisor of Elections in Leon County has been called to testify by the judge in this case. Earley is a veteran of the 2000 presidential recount. He said he is open to any suggestions to make the process better, but from his point of view the only ballots that are not allowed under these circumstances are the ones with egregious errors. "We err on the side of the voter," said Earley. "I think we try to make sure those votes are tabulated. But in my position, from my frame of reference, there has to be some check or guard against voter fraud."

Ultimately, Judge Walker will decide, and that decision could play a huge role in how this plays out.

A new, surprising, problem popped up on the radar Monday. Mark Anderson, Supervisor of Elections in Bay County, told CNN's D.J. Judd that he accepted 158 ballots from voters who were impacted by Hurricane Michael via email or fax. That decision was in direct violation of a specific order from Florida's secretary of state that gave special guidance to counties ravaged by the storm. Anderson claims other counties made the same choice. He also was clear that he took special precautions to make sure the votes were cast appropriately. "I think the important part to realize that we actually were able to pull off a successful election with checks and balances, we just didn't do willy-nilly e-ballots, they have security that was on them. We have documentation that's on them," Anderson said. "We have all the processes to backup and protect why we did what we did." (READ: CNN's full story on the decision)

There is no question that Anderson was dealing with a unique and difficult circumstance after the devastation of the hurricane. Still, Anderson appears to have broken the rules. The question is will anyone call him on it? That could be a precarious position for both sides. Bay County is a Republican County. If Democrats cry foul, that could run counter to their standard of "count every vote." If Republicans defend this action, it takes a lot of steam out of their argument that the law is the law.

Should Scott recuse himself

A lot of noise was made on Monday about Scott removing himself from the recount process in his official capacity as governor. Scott has taken some controversial action, like asking the Florida Department of Law Enforcement to investigate possible voter fraud (they found none), and asking Attorney General Pam Bondi to get involved. Scott was hit with a lawsuit Monday by the League of Women voters and Common Cause designed to force him to recuse himself. A hearing on the lawsuit is scheduled for Wednesday morning in federal court in Tallahassee. This, like much of the legal activity surrounding this story is theatre. So far Scott's actions, while bold, have had minimal impact on the actual counting of votes. In fact, both Palm Beach and Broward County agreed with him that some level of law enforcement monitoring the election equipment and ballots was a smart idea. However, Scott certainly runs the risk of taking it too far. He has already opened the door to Democrats describing him as a socialist dictator. In terms how this plays out, know this: only a court order will force Scott to recuse himself from anything having to do with being governor.