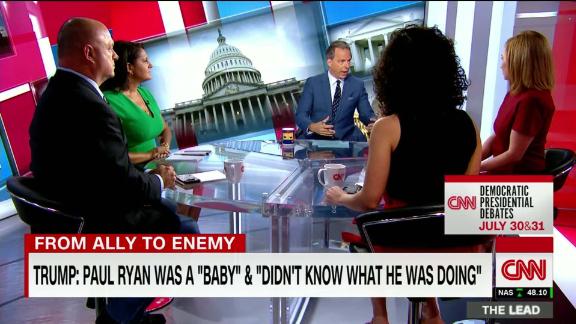 Politico journalist Tim Alberta, the author of a new book about President Donald Trump's rise in the Republican Party, said that Republicans' silence over the President's recent use of racist language speaks to Trump's influence over his party.

"I think that these events of the last 72 hours are actually serving as a pretty good microcosm of Trump's takeover of the party," Alberta said on CNN's "New Day" Tuesday.

Trump used racist language on Sunday to attack progressive Democratic congresswomen, implying in the series of tweets that the congresswomen weren't born in America and sarcastically suggesting, "they go back and help fix the totally broken and crime infested places from which they came."

Trump did not name the congresswomen he was criticizing, but Reps. Alexandria Ocasio-Cortez of New York, Rashida Tlaib of Michigan, Ilhan Omar of Minnesota and Ayanna Pressley of Massachusetts have been critical of Trump's immigration policies and last week condemned the conditions of border detention facilities.

The quartet of progressive congresswomen have engaged in a public and personal feud with Trump since his Sunday tweets, but many Republican leaders in Congress have thus far not spoken out, though some GOP members have weighed in publicly to condemn his comments -- at least 19 by CNN's count Tuesday morning.

According to Alberta, Trump viewed the Republican Party and its leaders in 2015 as "sort of feeble and as fearful of confrontation and as people unwilling to take the fight to the left, not just politically but really much more so culturally."

"What you're seeing over the last couple of days, with so many of these Republicans essentially avoiding confrontation with Trump is exactly what we saw during his political assent," Alberta said. "So it's no surprise to see it again now because he has effectively taken over the party."

Alberta shared pieces of reporting from "American Carnage" in his interview with CNN "New Day" ahead of the book's release Tuesday.

The book details early friction within the GOP surrounding Trump's rise during the 2016 presidential campaign followed by a gradual acceptance of his approach to the presidency within the party.

Alberta described on "New Day" how Sen. Ted Cruz reached out to Sen. Marco Rubio during the 2016 GOP primary to convince the Florida senator that they could beat Trump if they formed a ticket together. Alberta also described how Cruz tried to appeal to then-Ohio Gov. John Kasich to drop out of the race, arguing that at least one of them had to so Trump would not clinch the nomination.