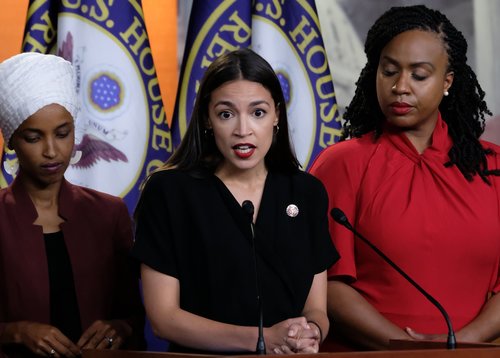 Rep. Alexandria Ocasio-Cortez on Tuesday defiantly responded to President Donald Trump's continued attacks on her and other minority Democratic congresswomen, calling him out for the various sexual assault allegations made against him and his boasts on the infamous 2005 'Access Hollywood' video.

The tweet from Ocasio-Cortez is the latest salvo in an ongoing heated and personal feud that reached new heights on Sunday when Trump falsely implied in a racist tweet that Ocasio-Cortez and several other minority Democratic congresswomen weren't natural-born American citizens. He suggested 'they go back and help fix the totally broken and crime infested places from which they came.'

'Hey Mr. President, remember when you bragged about sexually assaulting women, talking about feeling their breasts and genitals, because 'when you're a star they let you do it?' And then you imposed DOE policies to make it harder for sexual assault survivors to report assault?' Ocasio-Cortez wrote Tuesday, referring to the tape that surfaced during the 2016 campaign in which Trump is heard saying he was able to grab women 'by the p****' because he was famous. Trump later apologized for the remarks.

More than a dozen women have come forward with a range of accusations against Trump, ranging from sexual harassment and assault to lewd behavior, from before he was President. Trump has vehemently denied all of the allegations and has threatened to sue his accusers, though he has not done so.

In her tweet Tuesday, Ocasio-Cortez was apparently referring to new rules unveiled by the Department of Education in November that narrowed the definition of sexual misconduct on college campuses.

The New York Democrat was responding to a fresh attack by Trump in which he accused four lawmakers -- and women of color -- of 'spewing some of the most vile, hateful, and disgusting things ever said by a politician in the House or Senate, & yet they get a free pass and a big embrace from the Democrat Party.'

Rep. Ilhan Omar, a Minnesota Democrat who is among the four minority congresswomen that Trump attacked on Sunday, shared Ocasio-Cortez's tweet later Tuesday, adding in her own tweet that Trump 'doesn't want us to remember' the 'Access Hollywood' video.

'His 'locker room' talk is now Oval Office talk,' Omar said, referring to the phrase the President used to dismiss his remarks in 2016. 'Lets stop dismissing him and start holding him accountable.'

Later Tuesday, Ocasio-Cortez also responded to another tweet from Trump in which he said his Sunday tweets 'were NOT Racist. I don't have a Racist bone in my body!'

'You're right, Mr. President - you don't have a racist bone in your body. You have a racist mind in your head, and a racist heart in your chest,' Ocasio-Cortez wrote in a tweet.

White House counselor Kellyanne Conway weighed in on the feud on Tuesday, telling reporters at the White House that the group of lawmakers 'represent a very dark element' and that they 'cause trouble.' Conway would not respond to a question as to whether that comment itself was racist.

This story has been updated.