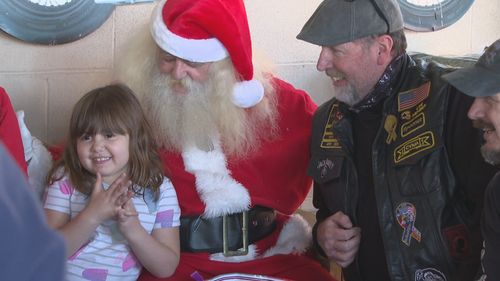 ELM GROVE, LA (KTBS ) -- A lot of motorcycle clubs like to show off a tough, imposing image. but during the Christmas season they get to show their compassionate side. Traditionally, Christmas gifts get delivered by sleigh and reindeer but for the past five years, they've come by bike in northwest Louisiana.

It takes the organization of David Trent and his wife Vicki, who enlist the help of motorcycle clubs from all throughout the Ark-La-Tex. The clubs then rise (or ride) to the occasion.

"These people have the biggest heart in the world." David Trent said, dressed in his Santa suit.

This year, 50 kids wrote letters to Santa, who contacted the dozens of motorcycle clubs and groups to sponsor the gifts on the wish lists. It all culminated Saturday at Our Place Bar on Lake Bistineau, where the kids meet with Southern Santa and the bikers to receive their presents. The kids were not told what was going to happen beforehand, including the biggest surprise, each child taking home a new bike of their own, along with a bag full of goodies.

"This is really awesome," said 11-year-old Sadie Sykes. "I really wanted a bike this year, but was probably not going to get it. It's a miracle."

"I really appreciate [the bikers]," said 11-year-old James Swayze. "They really surprised me. I didn't expect this to happen."

Even with so many motorcycle clubs represented all in one place, the traditional tough "biker" image is not a problem.

"They all get along because this is about the kids," said Vicki Trent. "They know that they would never ever have a problem out here with each other in front of kids" 3:00

"It just makes your heart so warm," said Stella Rosenke of A.B.A.T.E. of Louisiana. "You feel like you actually made somebody happy at a time when it's really kind of hard for these children at Christmas."

The bikers' generosity didn't stop with gifts for the children. They also collected money for David and Vicki Trent since they've spent the past few weeks organizing the event.

Please note: This content carries a strict local market embargo. If you share the same market as the contributor of this article, you may not use it on any platform.