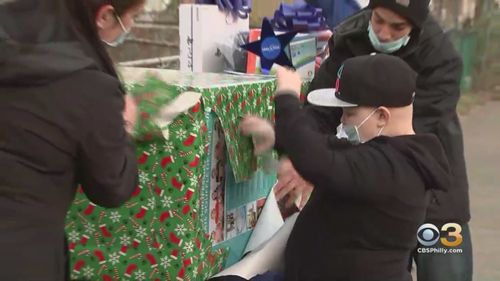 In the spirit of the holidays, a boy in Camden got a big surprise Friday afternoon, a special delivery right to his doorstep.

CAMDEN, NJ (KYW) -- In the spirit of the holidays, a boy in Camden got a big surprise Friday afternoon, a special delivery right to his doorstep. It was perhaps one of the most important calls Camden Police have recently responded to on Friday.

Officers arrived at the home of 8-year-old Antonio Zayas, not for an emergency, but to deliver gifts.

Antonio was diagnosed with severe autism at age 3.

Just months ago, on April 13, Antonio’s family learned he has cancer.

“Nothing no parent wanted to hear, but I already prepared myself to be ready because of his symptoms,” Mastalski said.

The Make-A-Wish Foundation teamed up with Camden Police and Subaru of North America and once they learned Antonio has a deep love for all things cars, what better way to surprise him with those gifts than by delivering them in a caravan of vehicles?

“This was a true community effort. We’ve got the Camden County Police Department, we’ve got Subaru of America based right here in Camden, and we’ve got our family right here,” Michael Dominick, the director of communications for Make-A-Wish New Jersey, said. “What a community.”

Besides Hot Wheels and race car tracks, Antonio received a new HDTV, a computer, clothes and bedding — gifts which will surely help him get through this most difficult time.

“He’s hanging in there. He’s a really big, strong, brave boy,” Mastalski said. “He doesn’t understand what’s wrong with him, but he knows that he’s sick.”

The family says Antonio is getting treatment at St. Christopher’s Hospital for Children, and they know these new toys and clothes will help make the overnight stays just a little easier.