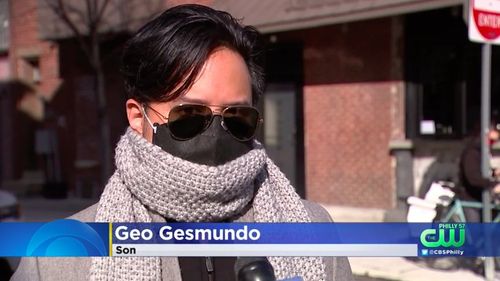 An 83-year-old man is in the intensive care unit after he was bound, gagged, and robbed inside his North Philadelphia home on New Year’s Eve.

PHILADELPHIA (KYW) -- An 83-year-old man is in the intensive care unit after he was bound, gagged, and robbed inside his North Philadelphia home on New Year’s Eve.

Gesmundo is on edge.

His 83-year-old father was beaten on New Year’s Eve night by intruders who broke into his North Philly home and gagged him.

Gesmundo showed Eyewitness News this picture of Mauricio Gesmundo, now in the ICU at Temple University Hospital with brain bleeds but in stable condition.

Police said he was beaten with closed fists around the head and face and only found once his family returned to the home on the 3900 block of Fairhill Street after celebrating the new year.

Authorities said no arrests have been made as the investigation continues.

But whoever did it got away with over $30,000 that was in the home as well, according to police.

“I just don’t understand how anyone can do this to any human being, let alone an 83-year-old,” Gesmundo said.

Gesmundo said his father has lived in the home for 41 years and wants justice for a man that he describes as someone who would do anything for his family and his community.

“And if there’s anyone on my dad’s street that witnessed anything, we’re just hoping that someone can speak up,” Gesmundo said.