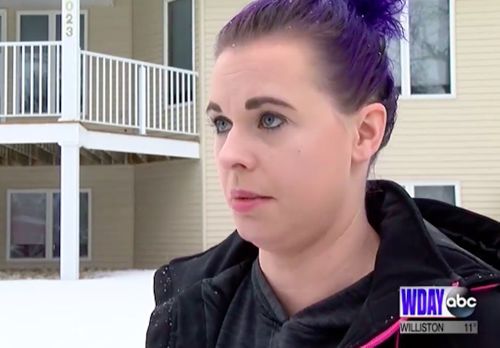 Flags are flying at a neighborhood house causing some controversy, specifically a "F**** Biden" flag, and "F*** You for voting for him" flag.

DETROIT LAKES, Minnesota (WDAY) -- Flags are flying at a neighborhood house causing some controversy, specifically a "F**** Biden" flag, and "F*** You for voting for him" flag. Kimberly, who doesn't want her last name used, has been flying the flag outside her home.

"I have been getting emails harassing me that I am teaching our children words and that I am traumatizing children with freedom of speech, basically," she said.

She has stopped flying the "F*** Biden" flag after calls and messages. She says she took down the flags because she fears for the safety of her children.

"Because I have children who I want to make sure are safe, and if there are people who reach out and complain about my flags, that makes me feel like my children are not safe."

Kimberly admitted she could get her point across without the profanity but said she is protected by the First Amendment.

"Yes, but that is what I chose to put up there. ... There is nothing saying I can't use a curse word," she said.

WDAY News spoke with Detroit Lakes Mayor Matt Brenk and Steve Todd, chief of police for The Detroit Lakes Police Department. Both are aware of the flags' profane references to President Joe Biden, and both sought legal advice regarding them.

Even though people may find the flags offensive, they are protected free speech.

"People have the right to express their views, under the Constitution, and the government has a very limited ability to restrict people to express those views, and when you think about it, it should be like that," said Charles Ramstad, an attorney at Briggs, Ramstad & Skoyles, P.A.

There is a city ordinance that says offensive public indecency is a violation of law, but Ramstad believes the First Amendment would overrule it.

"Like it or not, the benefits and burdens of the Constitution tell us that the (city) government has nothing to say about this," Ramstad said.

While most of Kimberly's neighbors were unavailable for comment, one neighbor that lives closest to her, named Lynn Kunkel, not only sympathizes with her, but wants flags to fly at her house, as well.

"I am okay with it; I can't stand Biden," Kunkel said about her neighbor's flags. "My son wants to fly one outside our house, too. He is upset about the election being stolen from (former President Donald) Trump."